SEE MANY MORE AUDIO LINKS BELOW 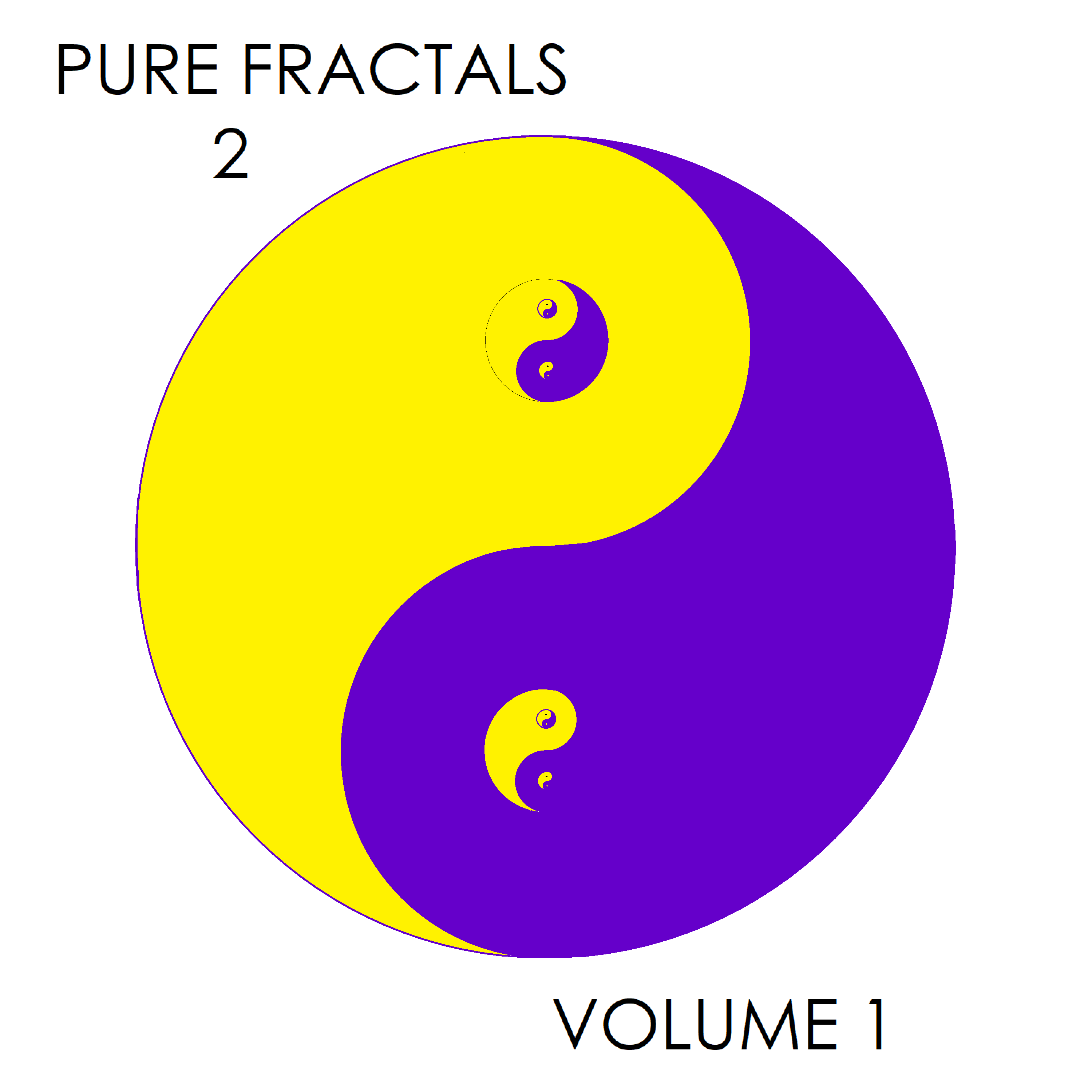 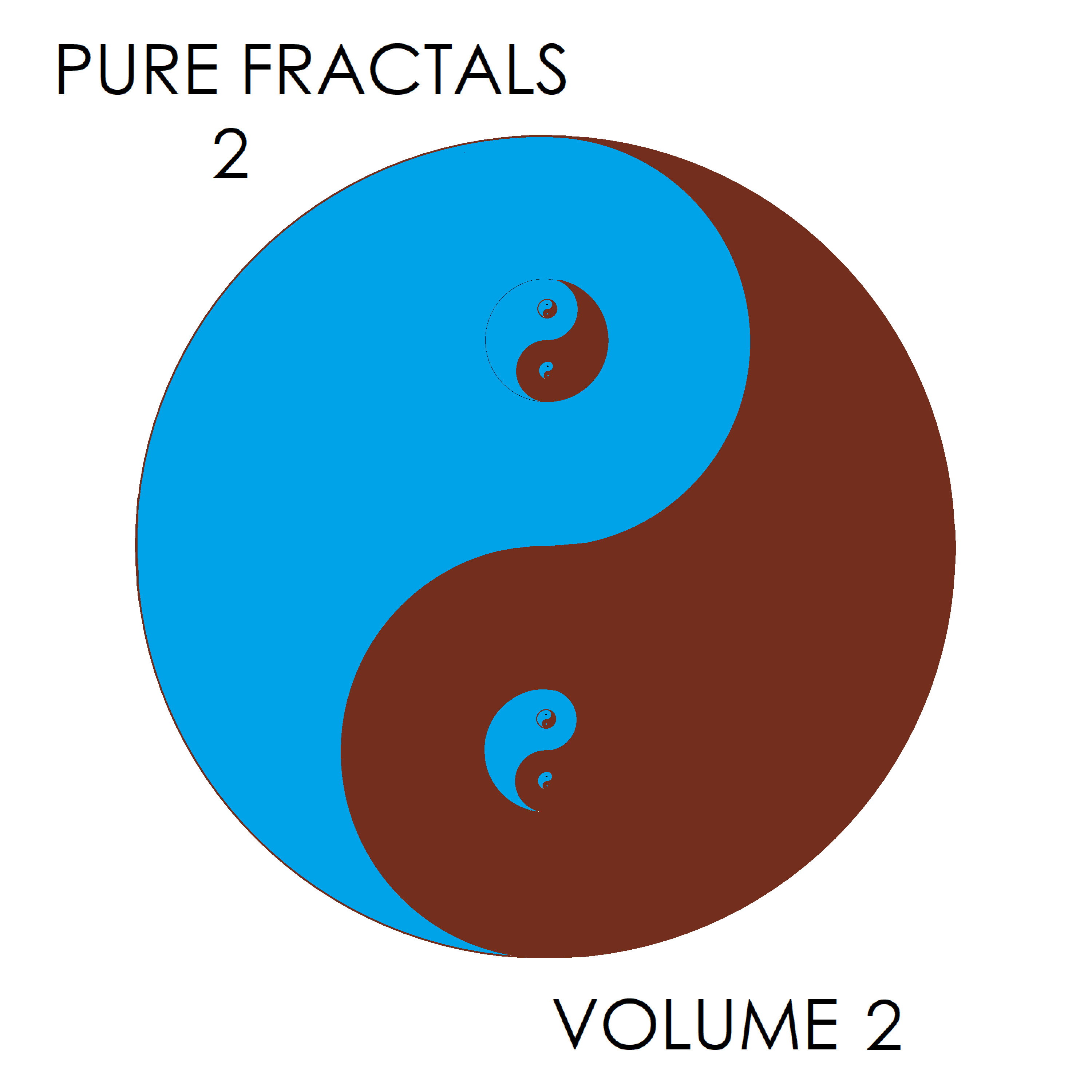 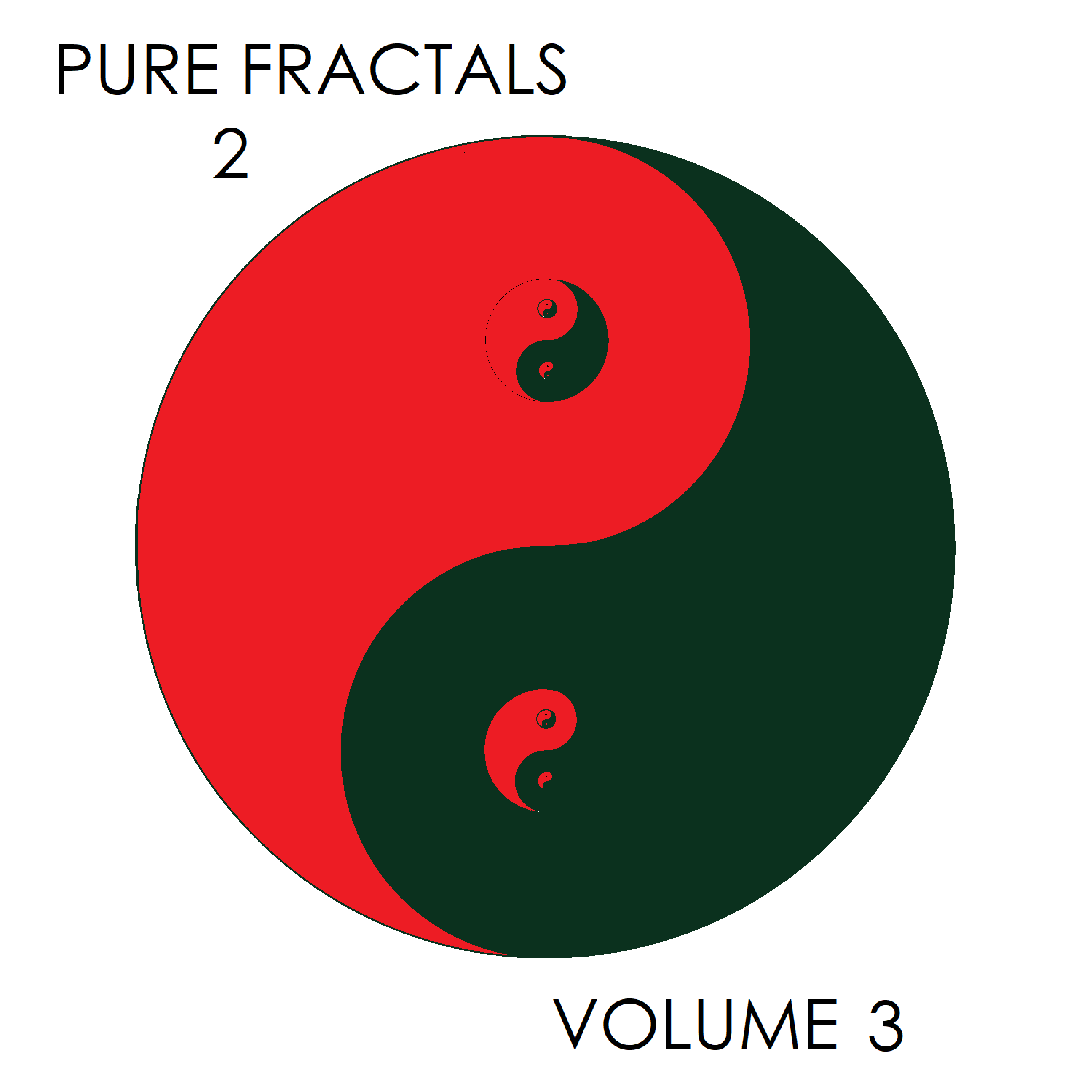 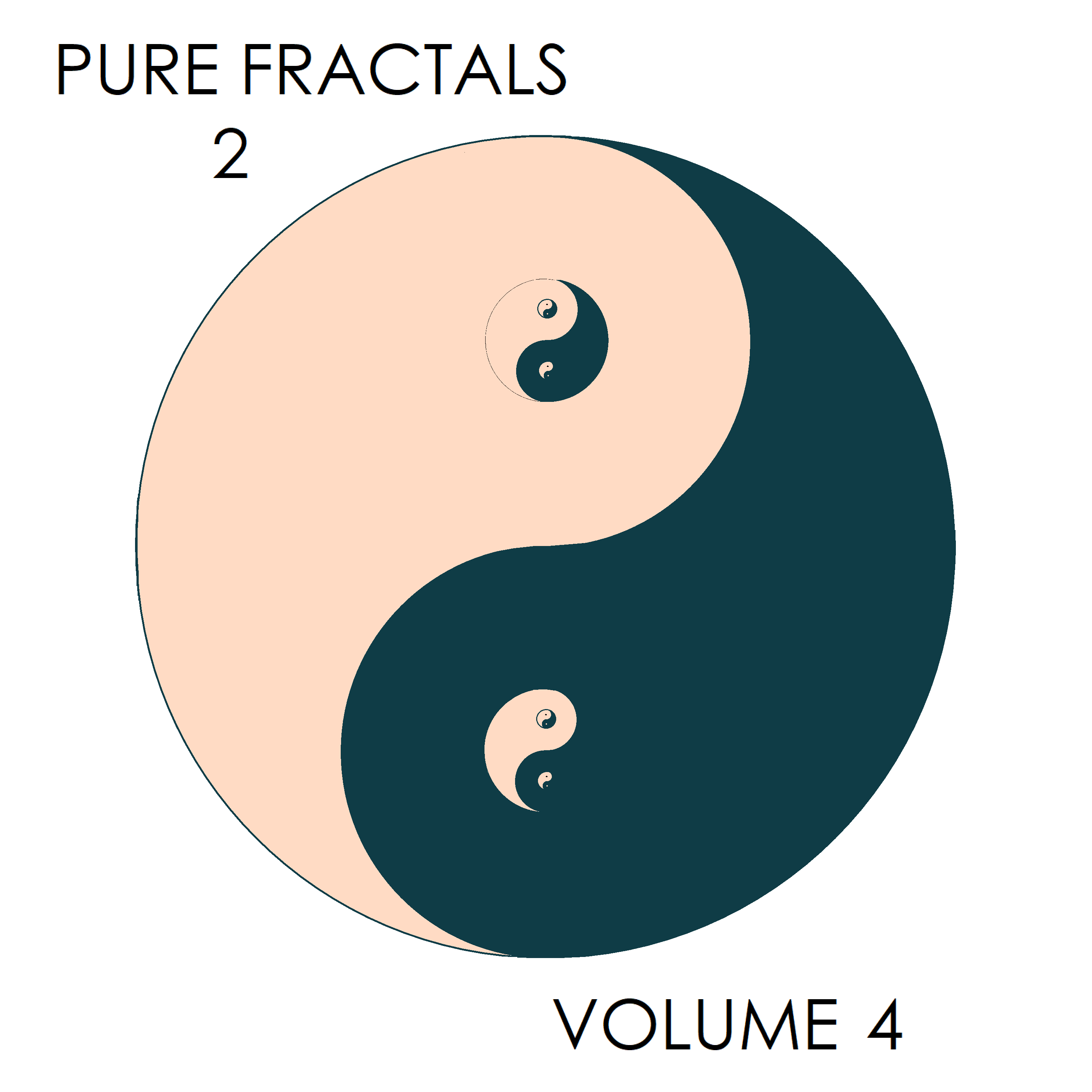 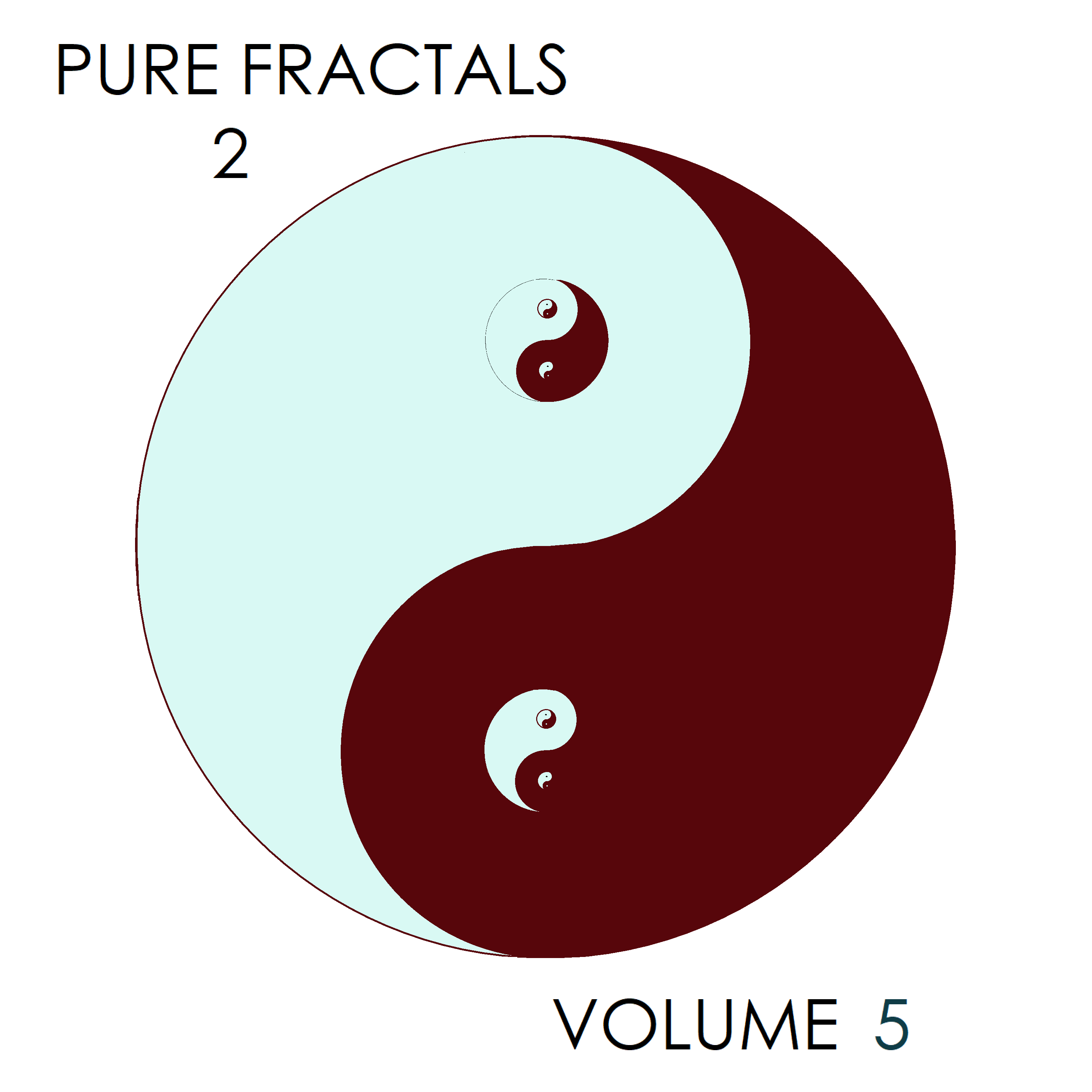 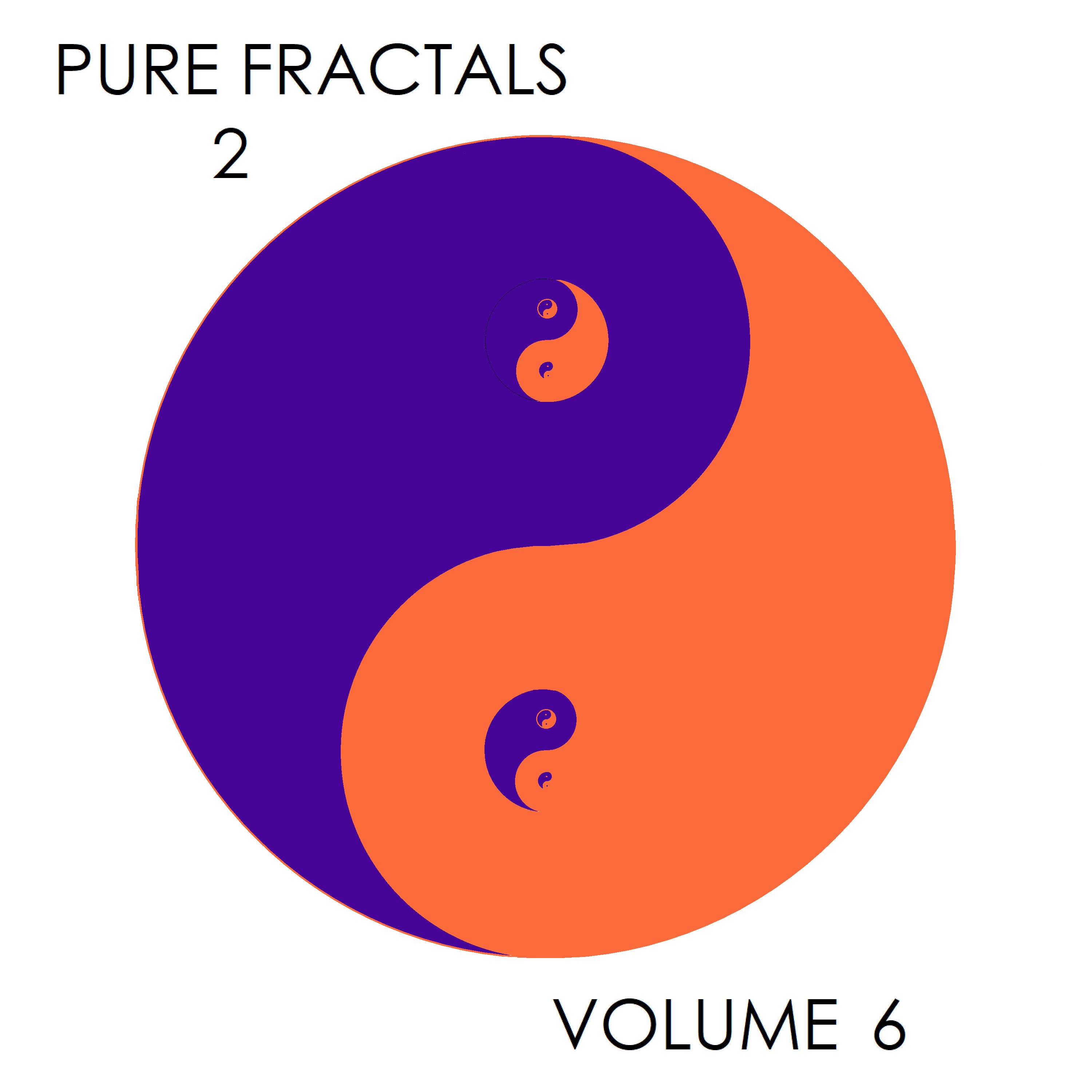 This release, completed in June of 2020, includes

Some examples taken from the 100 tracks of "PURE FRACTALS 2":

Self-similarity is a consequence of interaction in relationships of all kinds, especially when some level of adapatation is involved, as is so often the case. As depicted on the album cover artwork, there are pure forms of self-similarity as shown in a line level pattern that is replicated at many scales, each riding on the successively larger scale. For this exmple, the common pattern is like this:

And there are the more natural forms, as depicted in the wood etching of the album cover that follows the pure pattern, while each place is also influenced by all of its surrounding, in part according to proximity. In the more natural case with each point having a different "perspective" and thus being influenced uniquely, while some aspects of the wood etched patterns are similar to others, you can also find uniqueness if you look for it.

This album cover artwork is literally a depiction of the music of the first track "Celestrial Waterfall." This first track uses the very simple (3 pich level in 4 parts) pattern shown above to introduce you to the a way of listening in which you may percieve the simultaneity of 5 voices playing the fractal melodies as depicted in the cover art, in order to better appreciate what you are hearing. The combinations of rich harmonies that result, the juxtapositions and ways of percieving other patterns due to these juxtapositions, and, especially for tracks that follow, the ability to percieve many levels of rythmic variations, etc. can invoke the glee of a child with a "Where's Waldo?" book. Some tracks represent the purest forms while others are spiced with mild modulations analogous to the wood etching. To appreciate all this, it is recommended that listening be done with headphones and with eyes closed. "Storm Breaks" and "Jumping Butterflies" evolve some of the richest harmonies and subtly modulated juxtapositions.

Most of the titles are from impressions. For example, the first track reminded me of a meteor shower with the overall density like a waterfall. Coincidentally, the night before this CD was released I was returning home after Balkan dancing and saw a shooting star nearly hit the road at what appeared to be within 50 yards ahead of me.

While fractals have become famous and associated with chaos theory, antenna design, terse mathematical approximate models in biology, geography and other sciences, data analysis, data compression and most popularly for pretty pictures, I see them as a artifact projection of ubiquitous adaptation at every level of reality and the imagination. The most famous fractal of all, shown on the back cover of this album, is literally a portrait of a relationship between real and imaginary. After a quarter of a century of developing mathematical models for adaptive things, my view of the world is in some ways the opposite of the traditional mathematical view of the world: the cold rigid structures of the simple math equation only exist in the cold rigid structure of a similarly minded human. Everything has some level, though perhaps in some cases negligible for all practicle purposes, of interaction with everything else. And the most general nature of interaction is interadaptive. Interadaptive realtionships create self-similar trajectories. This music is a baby step towards the richness of this perspective.

My story about music and math:

From a young age I was taught musical instruments and notation and had ear training, all of which became instilled as relative: pitch intervals for melody and harmony on time grids for rhythm. After being tutored in advanced composition when I was 12, I felt I had composition covered. Because of my interest in other aspects of creating music ( electronics, signal processing, acoustics, recording), I became an applied math guy (engineering degrees, applied math and science) and have been experimenting with math generated music structures for decades. I put out an album in 2008, Pure Fractals, that used the melodic intervals (think of them as normalized frequency time derivatives) of the theme melody to modulate each note in the melody, repeatedly, each time generating a new voice, generally in a different register. On August 7, 2020 (9 days from writing this), I'm releasing an updated version: 100 new compositions via 6 EPs totaling over 17 hours of original math generated pure 2-D melodic (counterpuntal) fractals. They are in many different genres: Classical orchestra, metal, EDM, Latin jazz, experimental electronic, misc, etc. The 2008 release was all church organ and arranged so that each voice could be recognized for the fractals rendered. This time, it's a mixed bag: Some are obvious and others have modulated volumes, staccato and other things to make the music both more interesting and finding the patterns a little more "Where's Waldo" challenging. http://debone.com/pureFractals2.html

Click Here for performance dates of steel string guitar arrangements of music from around the world.

Back to Kevin Ferguson's Home Page

Contrary to popular belief, Paganini was not a real gambler.